Acatenango is the second tallest volcano of Guatemala’s 37 volcanoes. With a height of 13,000 ft, it is quite the trek from Antigua which sits at about 4500 ft. I have been studying Spanish in Antigua and wanted to spice up the weekend with a vigorous hike. It was truly challenging. Our group consisted of 6 gringos and 4 Guatemaltecos, 2 of which were our guides. Apparently the Guatemalteco trail blazers had never heard of switchbacks, the trail was straight up this 13,000 ft monster! With the rapid altitude change I  experienced the very noticeable change of oxygen in the air as we went up. We hiked for 6 hours in the first day, but there were plenty of good views to refresh us on the way up.

Guatemala is exceptional when it comes to its natural beauty. It is a very mountainous country and obviously has quite a bit of geothermal activity taking place. So far, it also has the best sunsets of my trip.

We hiked and hiked and arrived at camp right before sunset. Initially I was not really sure about what our tour included but our guides came through for us. As I speak very limited español and vice versa for their English, I mostly just kept quiet and kept walking. I was a little disappointed when I saw that other tours had firewood waiting for them and we did not. However, shortly after this sad moment one of our guides Mateo came running down the hill with, literally, a dead tree in tow. Needless to say we had the biggest fire of any group. 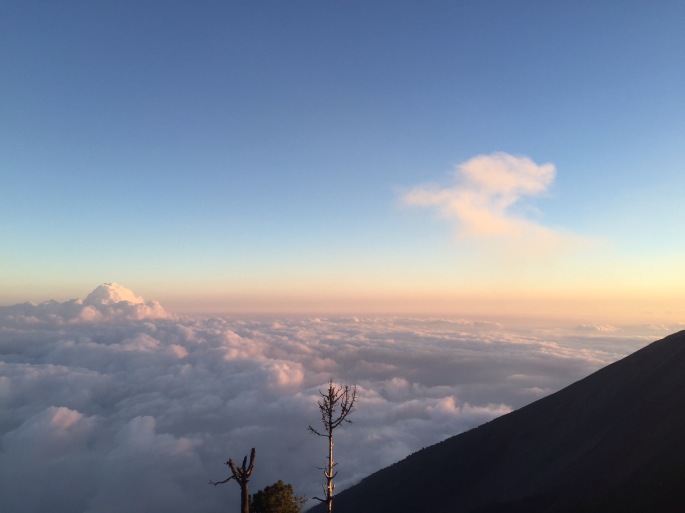 We camped right next to an active volcano, appropriately named Fuego, the picture above shows smoke bellowing from the top, but, unfortunately, we didn’t see any lava on this tour. There are regular eruptions from Fuego, in fact the first night I was in Antigua my hostel owner Fre pointed out lava pouring down the side of it! We had to be content with our modest camp fire instead… Which was not all that hard to do might I add. Our group got along great and we were able to translate some of the backstory of our guide Mateo. He is 60 and made of iron, he does this hike several times a week and says he spends more nights with Acatenango than his family. When we asked his secret he replied, “no se, tortillas de maiz, Acatenango, mi familia y…TEQUILA.” Adding the last bit as a joke/half truth. I’ll drink to that, salúd Mateo. Our great guides also surprised us with a bottle of whiskey, quite honestly the last liquor I was expecting to see on top of a volcano in Guatemala. A fine night cap before our 4:30 wake up call to summit Acatenango the next morning. Once again our ascent was straight up.
We arrived just in time to see my favorite sunrise ever, which really isn’t saying much as I am never up early enough to see one… It was freezing up there which made me very happy as I could finally use my wool sweater that had been taking up so much precious backpack space. It’s the little things…
Getting out in nature has always been one of my favorite things to do and this experience will definitely stand out in memory; however, it didn’t quite live up to the reputation everyone I talked to built up for it as “the most difficult thing I have ever done!” Better luck next time volcán! And although the hike up was great and all that, my favorite part was sprinting down all the lava rocks back down to camp! Not only was it quick but it was also fun, imagine skiing with no skis, the guide Willy and I were flying! It took one hour to summit and 10 minutes to return to camp. After a very physical weekend I am left mentally recharged and spiritually refreshed. Balance. So far Guatemala, I think I love you.
14.559744 -90.727936