With only minimal time to spend in Panama, I set my mind to using all of that time wisely, using every moment seizing the day and packing my one week with much adventure. Bus after bus I made it Boquete, a wonderful area full of jungle reserves. I gathered information about the next day’s hike and retired at my earliest bed time in months, 8 P.M. I awoke feeling refreshed and ready for my big day, I regretfully discovered the day had already passed me by. The refreshing hour of noon was only so refreshing because the good weather of the day had passed and it was raining; it was now going to rain the remainder of the day. After a very successful morning I decided to seize the rest of this day by eating a cheeseburger and napping. 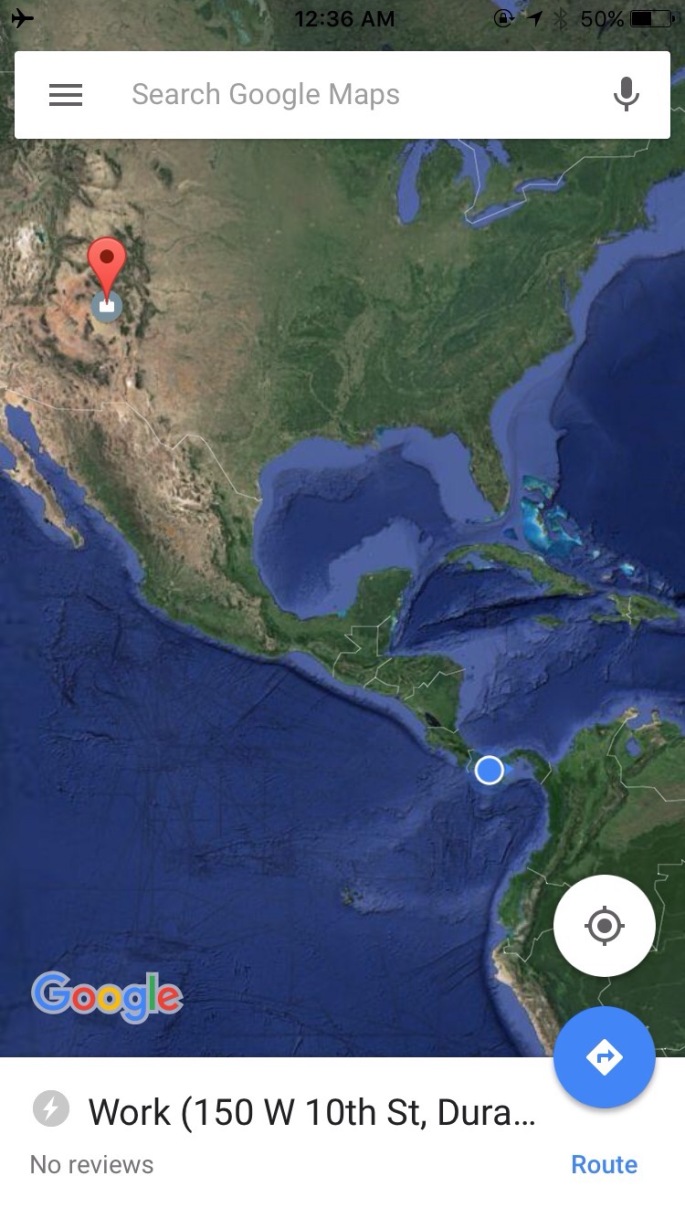 Perhaps my fatigue can be blamed on distance from home and time on the road?

After my exhilarating waste of a precious day in Panama, I was determined to be the early bird the next day. This determination quickly turned in to dedication, a dedication to more sleep. Finally springing from bed at the crack of 10 A.M., I raced out the door to the nearest bus stop. I then promptly waited. A half hour later a friendly character by the name of some two letter moniker happened along, RJ I believe it was. We happily chatted for another half hour. Without passing on his whole life story I will give you the cliff notes. RJ is 80, he likes walking, eating healthy and living the slow paced Panama lifestyle. He was born here but spent most of his working life in San Francisco. He likes both places but said he prefers to be in Panama, you don’t make as much money here but you don’t need as much either. “You eat healthier and there is less stress.” He recommended me to make my fortunes in the USA and then to retire in Boquete. He punctuated our chat by politely asking why it was that I was sitting at this particular bus stop. After my reply he responded that there was no bus to where I wanted to go. He laughed and we exchanged a friendly good-bye.

Despite all of my detours I am happy to announce that I did finally make it to the fabled Quetzal Trail. Against all odds, it did not rain the afternoon I was there, buen suerte indeed. I was finally on the trail and after going about a mile in I was being attacked by jungle horse flies. Whether it was because of extra onions on my cheese burger or my outstanding luck once again, I was not bitten by these Jumanjian jungle flies. They rather preferred to sit on my clothing and accept a free ride. Although it was an unsightly jacket I decided to let them stay there to stop there incessant buzzing around my head. So with my jungle fly jacket I proceeded to my first obstacle, a hole riddled bridge swinging in the wind. 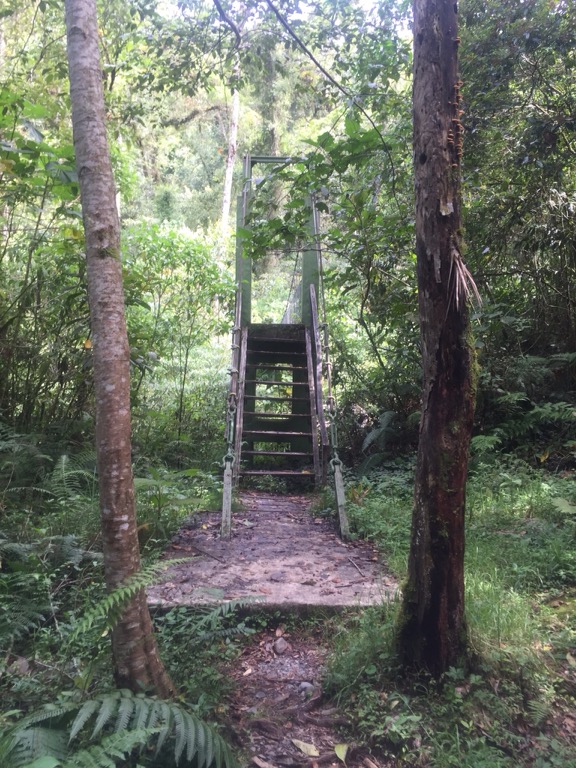 While the bridge is wonderfully framed through two trees, its general construction and condition are not quite as nice.

After crossing this shady bridge, it began to dawn on me that I had not seen anyone else on this trail. Just a beautiful secluded jungle…  Then I stumbled across this creepy house.

And that is when I started to remember the mental exercise of being alone in nature. Don’t panic, it’s not really creepy, just a house… Just a house, get away from the house!  I had not been alone in months and I had not been miles out in nature in quite some time either. I had a moment of panic but calmed myself down remembering the many other solo hikes and camping trips I had done. I decided to proceed in my jungle fly jacket and keep up my quest to see the elusive Quetzal. Crossing a beautiful stream I knew I had made the right choice. This confidence, however, was quickly turning into regret with each step. There were some new bugs tormenting me now, bigger and louder ones, who seemingly enjoyed whizzing as closely by my ear as possible. I began to pick up the pace to avoid them and was hardly looking around for any birds, the bugs would  have surely devoured me if I stopped! Stubborn, I continued. I approached an ominous sign in the road, a fallen tree. This tree had fallen in the midst of my ever shrinking trail as if to say turn back now young Elias. But stubbornly I climbed over the fallen Ent and proceeded onward!

Some call this a trail, I should have yielded to my fallen friend’s advice!

Now I was an anxious mess.  I was 5Ks in the jungle, alone, with an ever shrinking path.  My mental exercise was over, I was losing it.  I began thinking of every possible thing that could go wrong to me in this seemingly unpopulated (of the human population) nature reserve. I thought of breaking my leg, panthers, yetis and snakes. Snakes really seemed to take up most of my rampant imagination. When I could barely take one more step forward due to my paralyzing thoughts of dying in a venomous seizure via Fer-de-Lance, a thunderous CRACK erupted from the forest not 30 feet away. Like a bolt of lighting that should have proceeded such a racket, I flew down my narrow “trail.” I hurdled the old Ent and wished him luck with the yeti and made it back to that ever so beautiful stream I had crossed earlier. Now it was solely an obstacle to my escape.  And a great obstacle it was, I slipped off the stepping stones and got swamped. Popping up from my swim with a hellish flurry of cursing and arm swinging, I turned around and flipped off the stream, the yeti chasing me, the ever elusive Quetzal and the 10,000 jungle flies now drowned from my slip up. Not my brightest moment, not the most mature, but it felt good at the time. After this boisterous outburst I continued the great escape from the Quetzal Trail.

Finally arriving back at the entrance, I informed the guard I would never be returning and asked for a bus or taxi out. Neither were an option and my run continued for a few miles down hill until I found an unlabeled mystery van offering rides back down to Boquete.

My reaction to hearing there was no transportation, I listened to Lana del Rey, it helped.

To wrap things up, I give the Quetzal  Trail 5 stars. For only $5, you can’t buy excitement like this anywhere else!

Bella y la bestia (de tacos) - whats a beauty doing with a beast like me… yo no sé, pero i do know we Will eat Mary’s tacos and tacos Ivan everyday we are here…
The goats of Chicago Basin stopping in to say hello! #durango #chicagobasin #weminuche #backpacking #hiking #outdoors #goats #getoutside #colorado #coloradolife
Vegas… cigars are bound to happen… 📸 @shingledecker
Strangely Mesmerizing. 3 tons of concrete poured by 3 dudes in 1 day’s work 💪💪. Thanks for your help Tom. Lifesaver!